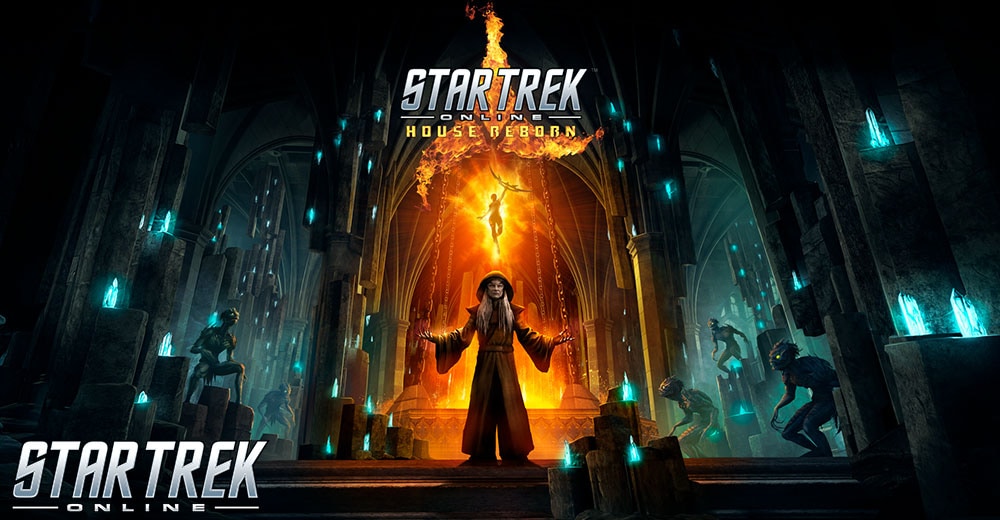 Divided...Shattered...Reborn. J'ula believed that the Klingon Empire, having seen proof of J'mpok's treachery, would rise up against him. She was wrong. The Great Houses splintered instead, shattering the empire into warring factions, looking out for themselves. Her brother, T'kuvma, gave everything to unite the Klingon Empire, and in one fell swoop, J'ula has undone all of it. Now, she must venture within to find the answers, at the holiest of Klingon worlds, Boreth. Journey with her there, and discover what lies in the heart of Grethor. Will the Empire be saved, or finally destroyed?

We're proud to announce that House Reborn is now live on PC! Experience an epic story through two new episodes starring J.G. Hertzler, Robert O'Reilly, Rekha Sharma, and our two newest cast members. Sam Witwer is stepping into the shoes of Kenneth Mitchell, taking on the role of Tenavik under Ken's direction. And Mary Chieffo is joining the story as well, reprising her role of L'Rell from the first two seasons of Star Trek: Discovery. What role could L'Rell have to play in this tale? You'll have to dive into House Reborn to find out.

But that's not all. With the release of this new update, we've completed our rework of the Klingon Starting Experience. Begin a new Klingon character now to experience the classic story, brought to the modern era with redesigned levels, updated character and environment art, new cutscenes, new voiceovers, and more. For the first time, you'll be able to experience that story as a Klingon from the Discovery era. It's the perfect time to be a Klingon - not least of which because the Klingon Recruitment Event begins today as well. Your new Klingon will be embroiled in a mysterious story, hunting down Enemies of the Empire for a shadowy benefactor. Play through the game as a Klingon, and unlock new Recruit rewards, like an exclusive T6 Ship, the M'Chla Refit! And of course, when you reach level 65 with any KDF character, you'll unlock the ability to fly every ship in the game across your entire account.

On top of all of that, it's our 11th Anniversary! Our game has officially been going strong for more than a decade now, and we want to celebrate with you. Join in the Anniversary Event through playing much of the new story content, or through playing the classic Omega Molecule Stabilization Game. Doing so will allow you to progress towards unlocking the first ever ship designed in concert between the Klingons and Romulans, the Temer-class Raider. And the Picard Zhat Vash Lock Box is here, giving you access to all kinds of twisted Romulan tech.

We're so excited to shout "Qapla'!" with you, Captains! See you on the honorable battlefield.