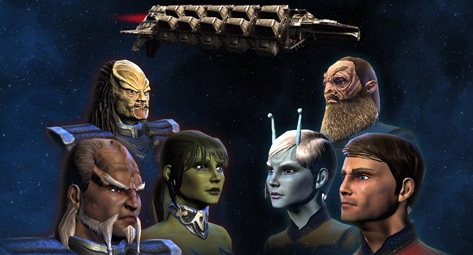 Since the Duty Officer system was unveiled, we have experimented with a couple of different ways of expanding the system. Some of these ideas included new species, new active roster abilities, Ultra-Rare Duty Officers, new traits, mixtures of random and set Duty Officers, and Duty Officers bundled with bonus items. From that time, we have learned a lot, both about what works and what does not. The Reinforcements Duty Officer Pack is an effort to bring together some of these lessons and evolve them even further.

In particular, one idea we wanted to revive was the idea of including things other than Duty Officers in a pack. The Duty Officer system itself deals with a large number of items that act both as inputs and outputs, and we wanted to reflect that in this design. More info on that in a bit.

The Reinforcements Pack includes the same breakdown as previous packs: one Blue quality or better, two Green quality or better and four White quality or better. These new Duty Officers come from existing species. For Federation players, this means Human, Andorian, Vulcan, Tellarite, Caitian and Betazoid (the last was in order to put more Telepathic Duty Officers into the hands of Federation players to balance out the KDF Ferasan advantage). For Klingon players, this means Klingon, Orion, Gorn, Nausicaan, Lethean and Ferasan.

The alternate active roster abilities include:

In addition to any Duty Officers you receive, you also will get one (1) of the following special bonus prizes:

The new Freighter isn't intended for combat, though it actually is functional at that for the earliest part of your captain's career. It can be switched to from your regular ship like a shuttle and is crammed with every Duty Officer system special we could think of. You can buy commodities at merchant ship rates from the interior, it has a Bank, access to the Exchange, a Mail console, Crafting, a Trader with additional Trade Duty Officer assignments, and can even periodically call a Security Ship for Contraband, Tribble Bounty and Prisoner Exchange turn-ins. Here is some more detailed information about this freighter: Freighters and Transports are large vessels designed for trade and long range cargo hauling. Almost all space-faring races utilize Freighters, and designs created by Ferengi and Cardassian corporations have become standard throughout the quadrant. The Tuffli Class Freighter is arguably the best vessel for managing Duty Officer Assignments, trade, cargo acquisition and transport, and other related commendation tasks.

The Tuffli Class Freighter interior has a number of amenities including a Trade Duty Officer Assignment contact, which is not standard on most starships. Both you and your allies can access the Trader.

Also assigned to the Freighter interior is a Quartermaster. The Quartermaster can sell you and your allies commodities at a discounted rate. A similar discount applies when you make any Energy Credit Purchase while onboard your ship (for instance, from Sector Space Freighter Stores). The interior also include access to the Bank, Exchange, Mail, and Crafting, all of which are accessible to you and your allies.

Tuffli Class Freighters are not designed as combat vessels. They come with minimal armaments designed only to ward off pirates and other would-be threats.

Note: You can switch to your Freighter from any ship interior. Once you're done using it, switch back to any ship from the Freighter interior. 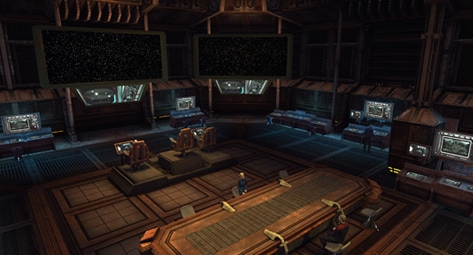 The Reinforcements Pack represents a new level of investment from the Star Trek Online team to the Duty Officer system, and we sincerely hope you enjoy this pack as much as we enjoyed bringing it to you. It will be available in the C-Store starting on Friday. We’ll see you in-game!