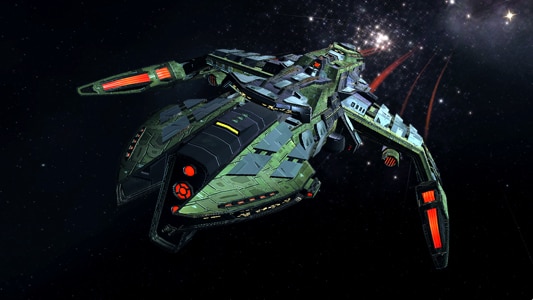 The introduction of Starfleet’s Avenger Class Battle Cruiser sparked a bit of an arms race between the Federation and the Klingon Defense Force. There is no way that the KDF’s engineers would let the Federation outdo them. The question for our art team was how to design a new combat ship that made sense for the Klingon fleet.

We wanted the new Mogh Batte Cruiser to have the same aggressive feel as the Avenger, but still feel very Klingon. So instead of being sleek, it has short, stout proportions, almost like a bulldog. There are also a lot of sharp angles, because this ship is a weapon. You can imagine a Klingon designer taking inspiration from his family’s D’k tahg when creating the Mogh. 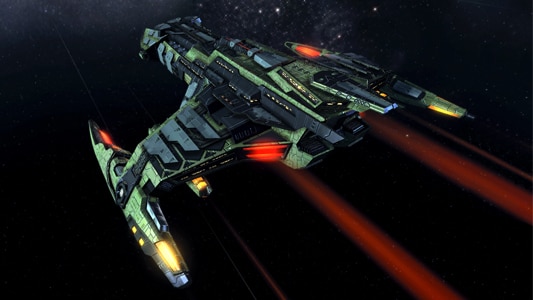 There’s nothing on this ship that doesn’t have a use in combat. There are visible hardpoints for all of the Mogh’s weapons, including a large, distinct weapon point in the center of the ship for the Mogh’s special Dynamic Defense Deployment System, a versatile rapid defense deployment weapon designed specifically for the ship.

We exaggerated the armor plating on the Mogh to emphasize the combat aspect of the ship even more. Even the ship’s windows are covered with armor plating when it goes into battle. No stray shot is taking out this ship!

Designwise, the Mogh is influenced by the Bortas class, which was introduced for Klingon players in 2012. It also takes inspiration from the iconic Vor’cha class, which is a fan favorite and a mainstay of the KDF fleet. To make the Fleet version of the Mogh Battle Cruiser feel unique, it has a straight pylon option not available on the standard Mogh Battle Cruiser. 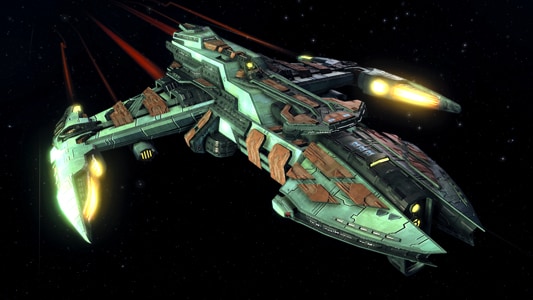 Finally, to provide more options for captains who want to customize the look of their Mogh Battle Cruisers, we’ve added a new ship material for use on this ship. The new material is shiny and more metallic than other Klingon materials – a fitting look for the KDF’s newest and most advanced ship.

More images and details, including stats and abilities, of the Mogh Battle Cruiser will be posted in tomorrow’s Dev Blog, and it will become available for purchase in the C-Store this Thursday, December 12th. We hope you enjoy flying the latest addition to the mighty fleet of the Klingon Empire!