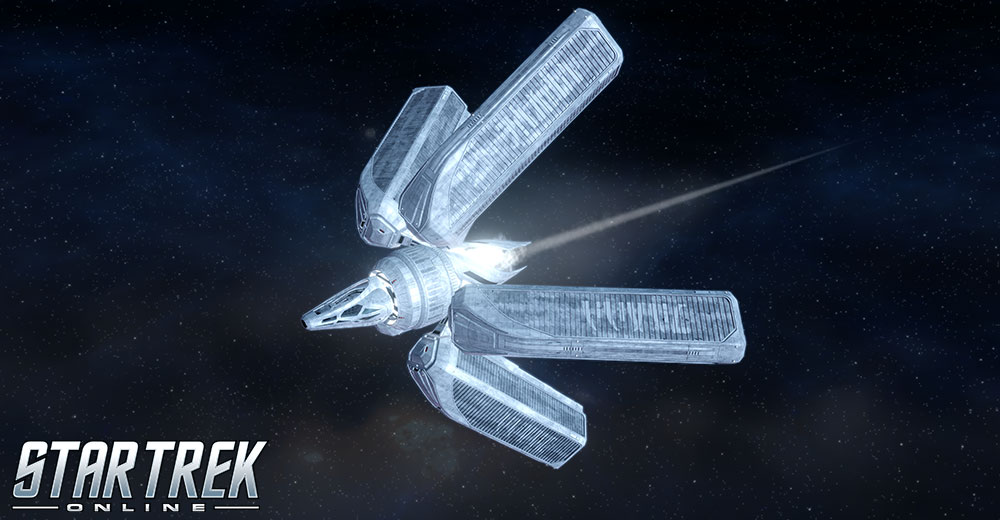 With the release of the Discovery: Unlikely Allies Lock Box alongside Star Trek Online’s next Story Update: Ascension, players will now have access to one of the Courier’s most versatile and agile ship designs – the Courier Pilot Raider [T6].

As seen in Episode 1 of Star Trek Discovery’s 3rd Season, this small-but-menacing vessel was commanded by the unscrupulous Cosmo – a rival from within the organization known only as “Couriers” which we would later learn answered directly to the crime syndicate empire of the Emerald Chain.

Outrunning, outmaneuvering, and outwitting your pursuers is the name of the game for Couriers of the Emerald Chain. This ship epitomizes the pursuit of those tactics perhaps better than any other in the Couriers' ragtag fleets. Improvements to artificial gravity alongside high-capacity inertial dampers allow this ship to confuse sensors with its constant spiraling motions, without risking damage to any cargo it is hauling. Couriers unable to avoid a confrontation are known to use crowded areas of space to their advantage, such as debris fields, asteroid clusters, or traffic-choked trade lanes, where this ship's ability to zigzag through those tight quarters is sure to give it the advantage.

Navigating debris-strewn space is not just part of the job for a Courier, but a solid tactic for utilizing their ships' increased maneuverability to their advantage when confrontation cannot be avoided. This specialized shielding technology applies an ablative field in front of the ship specifically designed to negate impacts from such debris, while also manipulating local space in such a way to improve the ship's maneuverability. Also, this shield may be used offensively -- approaching a shielded enemy ship will cause the field to overload and discharge, dealing kinetic damage to their ship based on the debris screen's capacity.

This console also provides a passive boost to Plasma Energy Weapon Damage, and Physical and Kinetic Damage Resistance Rating (scales with Throttle above 50%).

Activating any Pilot Bridge Officer Ability, or using a Pilot Maneuver, will release a series of Photon Mines behind your ship. This may not trigger more than once every 2 seconds.

Additionally, activating a Pilot Maneuver will reduce the remaining cooldowns on all Pilot Bridge Officer Abilities.

The unique spinning motion of these rockets is caused by a small shield-disruption device nicknamed the "graviton driller" which is fitted within each projectile. This experimental technology allows them to slip past the shields of most starships, but significantly reduces the yield of each projectile, and makes their guidance path a bit erratic. To compensate for the reduced yield, this launcher is equipped to fire multiple projectiles at a time.

(Note: Does not trigger from Attack Pattern: Lambda or Reroute Reserves to Weapons due to technical limitations.)

PC Patch Notes for 9/29/22
Check out all the exciting changes coming to Star Trek Online in our latest patch notes!
Read more
Upgrade Weekend!
PC Captains can get double the upgrade points this weekend!
Read more
Phoenix Prize Pack Event!
The Phoenix Prize Pack special event has returned! Get a free pack every day, and you can get Experimental Ship Upgrades with your tokens!
Read more