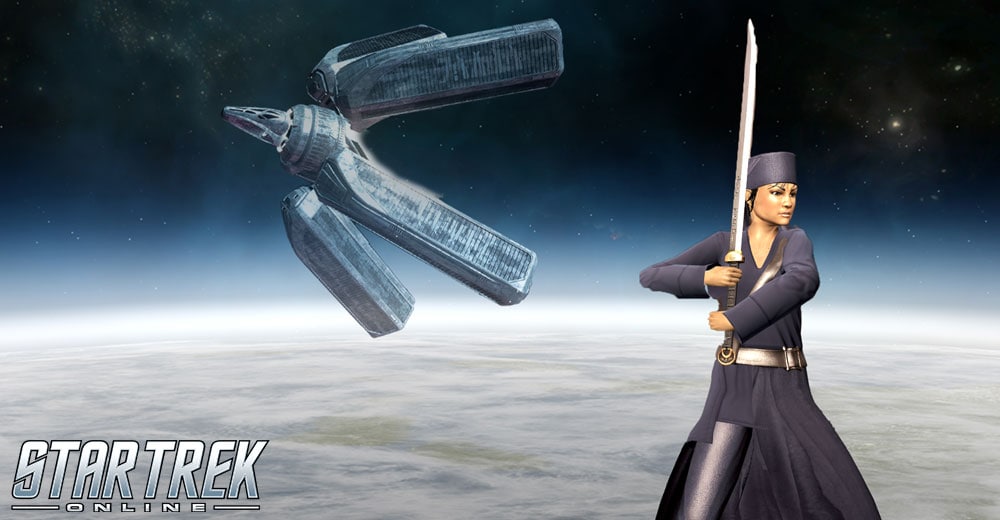 The core ideals of Starfleet are timeless. The Scientific Method and the pursuit of truth are almost identical, and the ingredients of a Starfleet Officer exist in every lifeform able to master space travel. Even in a distant future where the Federation has degenerated into a rump state barely able to patrol its own space, these principles are unreduced. Approaching the unknown with open arms is the right and duty of all sentience, and even should every last outpost fall, the Federation can be confident its best days are always to come. It is an idea that emerges from the pursuit of science and security, and even species who never encounter each other converge around the principles at the heart of Starfleet, ready to become fast friends and unlikely allies.

Star Trek was born in the cold war of a dream of a unified future, but it could just has easily have emerged in different times, among different people facing different crises. Wherever the cooperation of sentient beings gets more done than they would alone, wherever they value life, freedom and truth, the premise of Star Trek is there. As the scientific method builds a body of scientific truth, open hearts and open minds working in concert build a body of historical and personal truth: we can do more, be more, together.

The Lobi Consortium proudly endorses the idea of rational self-interested actors, consistent barter mechanisms across cultural boundaries, and of course conspiracies of convenience. The idea that pursuit of science gently guides societies toward cooperation is very pretty, and if you'd like to buy a memento of this hope you've come to the right place! The suggestion that greater education and personal empowerment naturally corrode market systems is not endorsed by the Lobi Consortium, do not exculpate such concepts on Lobi Consortium grounds. The Lobi Consortium considers the Federation to be a form of labor union and membership is forbidden to Consortium employees.

Captains opening the Discovery: Unlikely Allies Lock Box may find themselves fortunate enough to win the Courier Pilot Raider [T6]. Outrunning, outmaneuvering, and outwitting your pursuers is the name of the game for Couriers of the Emerald Chain. This ship epitomizes the pursuit of those tactics, perhaps better than any other in the Couriers' ragtag fleets. Improvements to artificial gravity alongside high-capacity inertial dampers allow this ship to confuse sensors with its constant spiraling motions, without risking damage to any cargo it is hauling. Couriers unable to avoid a confrontation are known to use crowded areas of space to their advantage, such as debris fields, asteroid clusters, or traffic-choked trade lanes, where this ship's ability to zigzag through those tight quarters is sure to give it the advantage.

(Additional information on the above starship will be contained in a separate Developer Blog.) 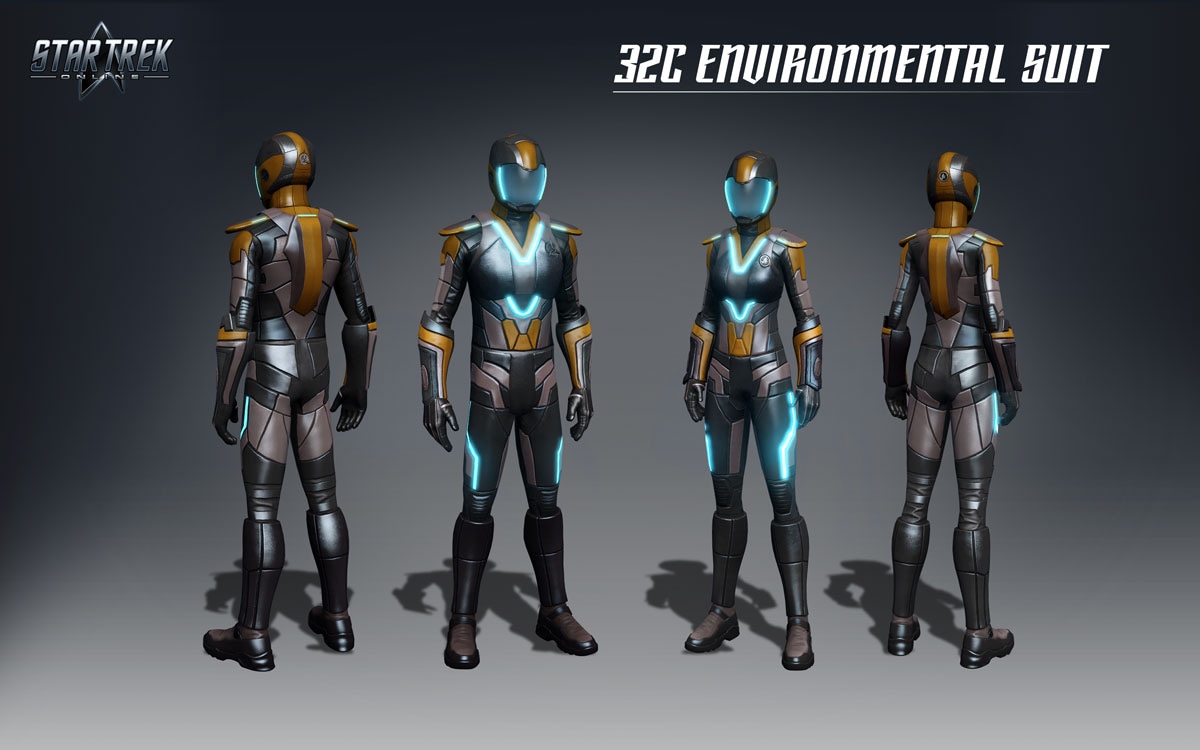 This Environmental Suit offers balanced protection, with an emphasis on preventing environmental hazards. The Environmental Suit can be activated, disabling the safeties, and putting it into a test mode; it deploys a randomized hazard typically used for calibration, but in this case modified to be created by Foes. The Hazard deals Damage over time, slows Foes, and has an extra effect based on what type of Damage it deals. An unorthodox use of equipment, but effective.

Disastrous natural forces often become useful tools when constrained in scope and handled safely… or, regrettably, weapons. The Micro Dark Matter Anomaly Universal Console projects a Micro Dark Matter Anomaly toward the target. This anomaly will follow the target ship until in range, then seek other ships, repeating until all ships are trapped within it or the duration expires. Ships become caught in gravitational eddies around the anomaly, causing them significant Kinetic damage and dragging them along wiht the Anomaly. Trace amounts of boronite are siphoned from the area, providing power to ship subsystems while foes are within the anomaly. Lastly, the anomaly projector provides bonuses to Max Subsystem Power, Exotic Particle Generation, and Hull Repair Rating.

The Discovery: Unlikely Allies Lock Box also has new Ground weapons inside the Courier Weapon Pack. Courier ground armaments have an unusual form factor and boast even more devastating Critical hits than standard Antiproton weapons. This improved effectiveness lasts a moderate duration and activates rarely on attack or when it Exploits an Exposed Foe. Rarely, weapon packs contain the Courier Pilot Raider Vanity Shield, providing the aesthetics of the Courier Pilot Raider to a ship that equips it in its vanity shield slot.

Deploys a series of Bladebeetle Mines, engineered lifeforms with very short, volatile lifespans. They march toward the nearest Foe, pausing occasionally to fire devastating saws that pierce through Foes in a line. The Saws deal Kinetic Damage and reduce Foes' Kinetic Damage Resistance Rating. Once contact is made, the beetles detonate, dealing significant Kinetic Damage to nearby Foes.

New relationships and contacts offer the possibility of new strengths to Captains willing to trust unlikely allies. One of these provides unique bonuses on Ground Active Duty, the other two on Space Active Duty.

Six new Captain’s Traits are also available within the Unlikely Allies Lock Box. They are universal and available to all species.

Periodically activates a random ability from among Attack Pattern Omega I, Photon Torpedo Spread I, and Emergency Power to Shields I. Note that this is not the firing mode, this is the attack itself – even if the ship doesn’t have photon torpedoes equipped.

Space: Against All Odds

Increased Hull Healing on targets who are low on Hull.

Increased exploit damage, negates the first CC attempt on you.

Increased Healing on targets who are low on Health.

There are many other prizes within the Discovery: Unlikely Allies Lock Box for players to acquire, such as the Courier Pilot Raider Vanity Shield, R&D Packs, Boosts, and other assorted items.

The Lobi Store also has a new item available for purchase:

This blade and the training accompanying it turn the character into a deadly melee combatant. The primary attack is a randomized combo involving most normal sword styles of attack combined into one button; defeating a Foe with this attack applies Stealth for a few seconds. The secondary attack is a conical area damaging slash; defeating a Foe with this attack allows it to be reactivated to deliver a devastating 360 degree slash to nearby Foes. The tertiary ability, Pledge, targets an ally; the wielder charges to the aid of the ally, Stealthing them briefly, gaining a large bonus to Dodge for the wielder, and providing a modest Heal to the ally, Reviving them if necessary.

Save 50% on Lifetime, and 75% in Mudd's!
Save 50% on a Lifetime Subscription and 75% on most of Mudd's Market this weekend on PC!
Read more
PC Patch Notes for 1/26/23
Check out all the exciting changes coming to Star Trek Online in our latest patch notes!
Read more
Bonus Marks Weekend!
Captains on PC can earn bonus Marks this weekend!
Read more