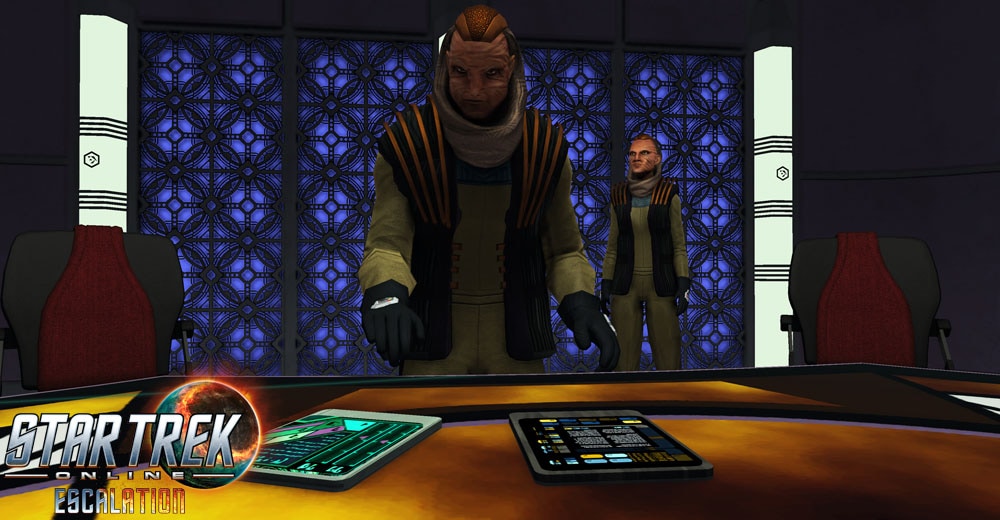 The comm message jolted Se’lim out of his reverie. He checked the time. Had it only been an hour since he completed the dreadnought plans? Only an hour until his sense of elation was quickly overshadowed by a creeping sense of unease? The Son’a, his people, would they be tempted to break the peace with this new ship?

Straightening himself, a wrap fell from his shoulders. Where had that come from? Must’ve been his Tarlac – she was quite well trained and attentive to his needs, even when he wasn’t aware of them. Se’lim sat heavily before bending down to pick up the soft wrap, grunting with an exertion only another elderly person would understand.

With a heavy sigh, he answered.

Intel officer Kalliom looked around the room one last time as Chief Architect Se’lim ambled through the doorway. He narrowed his eyes at the Tarlac slave – no, servant – who followed the old man. To his right, Admiral Karr motioned impatiently, ignoring the woman who obviously didn’t belong in here. Clearing his throat, and giving her one last glance -- Really? Was no one going to ask her to leave? -- Kalliom began.

“The Alliance wants the dreadnought plans,” he said, pointedly.  “Admiral Karr believes that they will use any means necessary to obtain the plans, although they’re currently offering to review them to help us make sure the design is safe. As a gesture of… goodwill.”

He looked around. Some faces betrayed surprise, some anger, and some were devoid of emotion.  Excellent poker players, he thought bitterly. “They’ve indicated they’re ready to negotiate with latinum or other valuable supplies as well.”

Admiral Karr spoke up, “It’s obvious the various Alliance intelligence agencies are keeping tabs on us. How else would they find out so quickly about a ship design that Se’lim just finished?”

The room witnessed a lot of bickering, shouting, and maybe even a little bit of crying over the next hour. There was only one thing everyone could agree on, and that was the Alliance should not have the dreadnought designs. And, thus, the debates continued…

“Se’lim, are you all right?!” A Tarlac voice suddenly cut through the arguing Son’a officers. He had another coughing fit, and wiped away some blood.

“I’m sorry, I’m afraid my health isn’t what it used to be,” the architect replied. “Can we hurry up and decide what to do about these Alliance demands already? Hmm?” The old architect looked around, and then settled his hand on the hand of his servant.

As the room erupted in argument once more, the Tarlac servant spoke again, much to the ire of Kalliom.

She looked down, and tried very hard to fade into the background as a room filled with astonished Son’a contemplated her words.

Se’lim looked between the two pads. There was one obvious flaw for Starfleet to find. “A sign of goodwill? Let’s see if they tell us about this one!  Heh!” Chuckling at his own cleverness, he then moved a link buried deep in the ship’s warp system in the fake dreadnought design. That will be hard to find. If they build it as designed, the warp core will breach in a matter of hours after they bring it online.

Satisfied, he signed his name in the color of glittering rubies. “Ugh, so ostentatious.” He placed the dreadnought ship designs down on his desk. Magically, the Tarlac showed up just in time with his meal.

“I could also use a massage,” he said, wearily.  “It’s been a tiring day for this old man.”

“Of course, sir. Officer Kalliom is waiting for the fake ship designs though…”

“Very well, but make sure he feels guilty about making an old man wait for his therapeutic massage.” He waved at his desk, “Take the one with the ruby signature.”

She did a little dip with her head, grabbed the PADD, and headed out. Does she even know how mesmerizing that move is? He wondered…

Construction was well underway when Admiral Karr arrived to supervise. He took in the sight of the dreadnought’s frame and thought: the Son’a will finally have a dreadnought class ship in space! He picked up the PADD containing the blueprints for the ship and looked it over.

“Good work, chief. You leave the Son’a with a fine legacy.” He barely spared a glance at the old architect as he ambled into view.

“Yes, I certainly hope so.” Se’lim hesitated, not sure if he should ask what the first mission for this mighty ship will be.

“I have one question for you.” The admiral started before Se’lim could say anything else. Turning to look at him, Admiral Karr remarked, “It’s unlike your style, so I must know -- Why did you suddenly start using glittering ruby as the color of your signature?”