Have you had an opportunity yet to try out Star Trek Online’s newly revamped Tutorial experience for 2409 Federation characters? If not, now may be the best time to do so!

“Why now,” you might ask? Because for the first time, we will soon be offering an opportunity to jumpstart the career of just such a Cadet, thanks to the introduction of the Legendary Federation (2409) Captain Bundle. By attaining this bundle, you can now instantly raise the level of any single 2409-era Federation character on your account to Level 65!

This valuable bundle includes all of the following features:

This immense bundle will be available on PC starting on May 26th, 2022, for the base price of 12,000 Zen. For a limited time, enjoy a special introductory offer of 50% OFF (available only from May 26th thru June 9th)!

Players on Console platforms will also be able to obtain this bundle starting on June 30th, with the same introductory 50% OFF sale lasting through July 14th, 2022.

Keep reading for complete details of what to expect from this value-packed opportunity!

Appearing as part of this bundle is a Max Level Boost which you can use to immediately set a character to max level. This powerful Boost is yours to use as you see fit, provided a few restrictions are met:

Provided these restrictions are met, the process is as simple as claiming the Special Item unlocked by your purchase of the Bundle, and applying it to the character of your choosing. This will immediately elevate that captain to the rank of Fleet Admiral, and place an Equipment Bundle into their inventory.

This level-up process is designed to be usable for characters of any level.

Have an old Federation alt you rarely play, languishing at Level 30-ish? Give them a new lease on life, with an immediate boost to max level, and all the resources needed to hit the ground running!

Looking to check out the revamped Federation starting experience? This boost opens the door to playing the entirety of the Federation story arc, without the worry of leveling up and re-gearing between episodes. If it’s been some time since your last play through, there have been a lot of changes to what a new captain experiences out there among the stars. It’s worth taking another look!

Unlike the Jem’Hadar experience of starting the game at Level 60, players using this boost will still have the opportunity to assign their character’s skill points, specialization points, and traits, as well as equipping the provided gear, in whatever manner they like. The choices are yours to explore.

Ready for the Frontier!

After being boosted to Fleet Admiral, your newly-elevated captain will find themselves in possession of an equipment pack begging to be opened. This bundle-within-a-bundle represents an incredible value of high quality gear and other resources, ready to put you on the path to immediately enjoying what life at Max Level has to offer!

This pack contains all of the following:

** All items received from this bundle are Bind-to-Character-on-Pickup, and have no Energy Credit value if discarded. 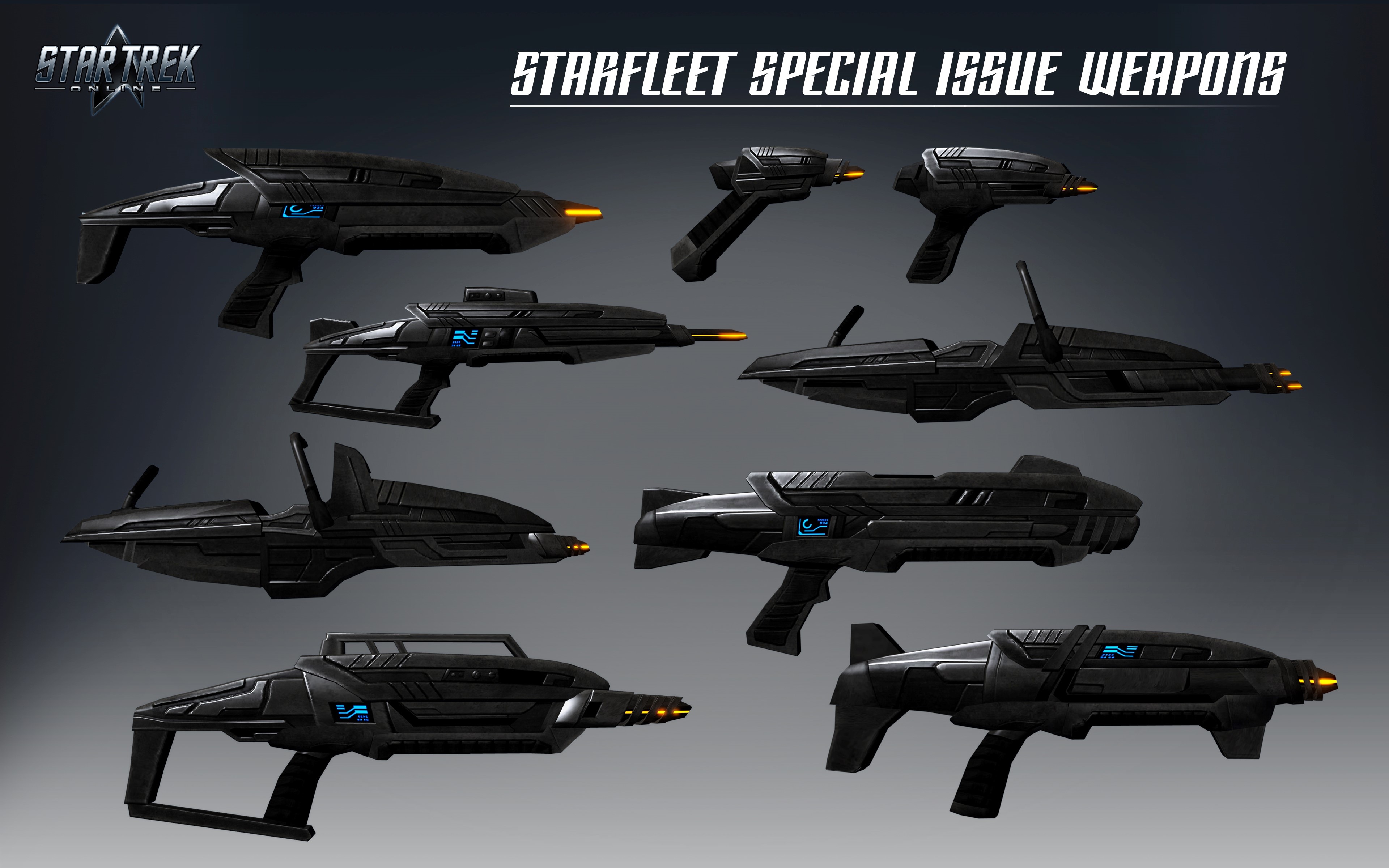 Let your new Fleet Admiral explore the galaxy in style in a never-before-released Legendary Starship, and unlock access to this incredible starship for all characters on your account.

The Vesta-class line of ships has already proven itself a capable and versatile vessel in many regards, which caused Starfleet Intelligence to take a keen interest in further developing and specializing some its well-known functionality for dangerous - and sometimes highly-classified - intelligence operations. The result of these developments is the updated Caelian-class, which can in many respects be seen as the pinnacle of its lineage.

Like other Legendary Starships, this vessel is meant to represent the pinnacle of an entire line of vessels. It will include – in a single starship – all of the Consoles, Starship Traits, and Costumes, from the entire line of both the Tier-5 and Tier-6 variants of the Vesta families of starships, including: 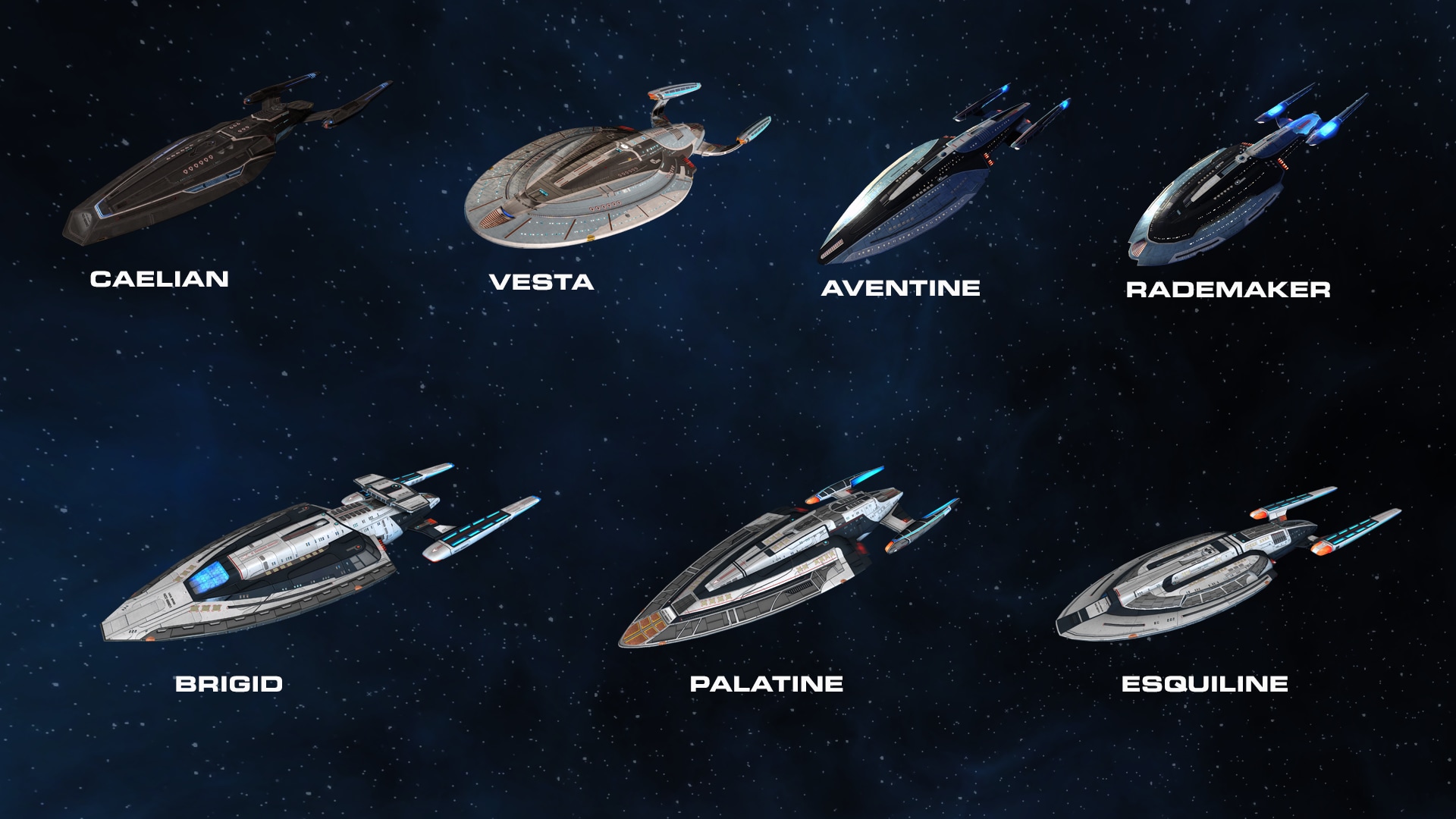 Visuals for all of the above ships are unlocked when the Legendary starship is commissioned, along with its brand new Intelligence-style customization options. All of these options may be used interchangeably with one another, to help you get the perfect look for your new flagship.

Additionally, with the recent remaster of the Vesta-class line of starships, new additional material and window options were recently added. The Caelian-class and all other ships within this family of starships are able to use these updated options.

Purchase of this Bundle will unlock the ability for all characters on your account to claim and fly this versatile science vessel.

The Legendary Caelian Intel Multi-Mission Explorer comes with the following features from previous ships within its lineage:

Upon reaching level 5 in this starship's mastery, you will unlock the "Charged Particle Reaction," "Exotic Particle Shielding," and "Heavy Tachyon Mine" Starship Traits. These traits can be found on the previous versions of this starship.

Upon reaching level 6 in this starship's mastery, you will unlock the "Catom Reconstruction" Starship Trait for all characters on your account!

While this trait is slotted, activating Hazard Emitters or any Intel Bridge Officer Ability will build up charges which will enable automated healing while your Hull is low. If you have one or more charge, one will be consumed every few seconds while below 50% Max Hull in order to immediately restore a percentage of your Max Hull.

Jump-start your career as a Fleet Admiral in the Federation!